To BC School staff: Do NOT comply with the January 17/22 unlawful BC Provincial Health Order to provide your private medical information. It is illegal and in violation of your Charter rights. 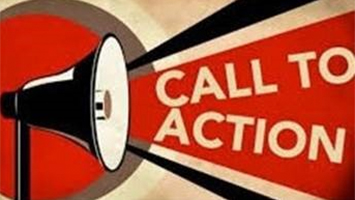 We request all school staff REFUSE TO COMPLY with any School Board Mandates and/or local Medical Health Officer Orders.

Also, serve Notices of Liability to the Trustees/Superintendents, Unions and the Medical Health Officers. Be sure to include the additional letter. Contact List: Union Presidents/Medical Officers

Citizens are 100% guaranteed the right to employment without being subjected to coercion, extortion, threats and intimidation.

On Jan 17, 2022 the B.C. Health Officer, Bonnie Henry, implemented an unlawful Provincial Order advising that school staff must disclose their vaccination status to their employer if so directed by the local “Medical Health Officers” (MHO). In this Order Henry authorized the MHOs to create additional orders to access your private information. This is a violation of privacy rights. Do not comply.

To begin, you need to be aware of the Supreme Court of Canada’s (SCC) findings in many cases on the Constitutionality of privacy. As stated by the SCC in O’Connor (1995 4 SCR 411, 1995 CanLII 51 @ para. 121) privacy, especially with respect to one’s confidential private medical information as being a core of biographical information and in relation to one’s lifestyle and/or political/religious opinions, is both a common law and Constitutionally protected right pursuant to s. 7 and 8 of the Charter of Rights and Freedoms. I bring to your attention the following dicta from the SCC in O’Connor:

“In my view, it is not without significance that one of those rights, s. 8, has been identified as having as its fundamental purpose, “to protect individuals from unjustified state intrusions upon their privacy” (Hunter, supra, at p. 160)….Respect for individual privacy is an essential component of what it means to be “free”. As a corollary, the infringement of this right undeniably impinges upon an individual’s “liberty” in our free and democratic society. (@ para. 113)

Privacy has traditionally also been protected by the common law…

In Hill [v Church of Scientology of Toronto 1995 CanLII 59 SCC]…Cory J. reiterates the constitutional significance of the right to privacy…reputation is intimately related to the right to privacy which has been accorded constitutional protection. As La Forest J. Wrote in R. v. Dyment 1988 2 S.C.R. 417, at p. 427, privacy, including informational privacy, is “(g)rounded in man’s physical and moral autonomy” and “is essential for the well-being of the individual“. (para. 115)”

“…privacy is at the heart of liberty in a modern state”….This interest to be left alone by the state includes the ability to control the dissemination of confidential information. As La Forest J. stated in R. v. Duarte, 1995 1 S.C.R. 30, at pp. 53-54:

It is certain every man has a right to keep his own sentiments, if he pleases: he has certainly a right to judge whether he will make them public, or commit them only to the sight of his friends.

These privacy concerns are at their strongest where aspects of one’s individual identity are at stake, such as in the context of information “about one’s lifestyle, intimate relations or political or religious opinions“: Thomson Newspapers, supra, at p. 517, per La Forest J., cited with approval in British Columbia Securities Commission v. Branch…1995 2 S.C.R. 3, at para. 62.

The significance of these privacy concerns should not be understated. Many commentators have noted that privacy is also necessarily related to many fundamental human relations.

To respect, love, trust, feel affection for others and to regard ourselves as the objects of love, trust and affection is at the heart of our notion of ourselves as persons among persons, and privacy is the necessary atmosphere for these attitudes and actions, as oxygen is for combustion.

In fostering the underlying values of dignity, integrity and autonomy, it is fitting that s. 8 of the Charter should seek to protect a biographical core of personal information which individuals in a free and democratic society would wish to maintain and control from dissemination to the state. This would include information which tends to reveal intimate details of the lifestyle and personal choices of the individual.”

The SCC has emphasized in the strongest possible terms, that our right to privacy is sacrosanct and subsumed in both s. 7 and 8 of the Charter and is of paramount importance to our life, liberty, security of the person and from unreasonable search and seizure. Bonnie Henry’s recent Order is in fact, an attempted unconstitutional seizure of our personal and private medical information.

Henry quotes Section 42 of the Public Health Act which instructs school staff that they have a duty to comply with this Order and failure to do so would be considered an offense under section 99 (1) (k) of the Act.

These Sections of the Health Act do not apply to the gathering of private medical information and are only being quoted to intimidate staff into compliance.

According to Section 52(1) of the Constitution Act, ALL Statutes, Orders, By-laws, and “Acts” must be consistent with the Constitution…or they are of no force or effect.

Henry is determined to vaccinate all school staff but is aware there are obstacles standing in her way, such as human and privacy rights and bodily autonomy.

The success of Action4Canada’s campaign is frustrating the government. Henry is not being successful in fully mandating vaccination via the School Boards so she is attempting to create a workaround and come at this from another direction via local MHO’s. But no matter how they approach this, it all leads back to School Board Trustees being the ones in the position of handing over the private medical information and opening themselves up to personal liability.

A data collection grab was already attempted in School District 23 and failed. On Dec. 10, 2021 School Superintendent, Kevin Kaardal, sent a letter to SD23 school staff demanding they fill out a Vaccination Data Collection Notice by January 2022 or risk consequences (such as unpaid leave). Kaardal was immediately sent a notice from Action4Canada once again warning him of liability. The data grab failed and it was recently reported by the Epoch Times that Kaardal admitted that the Notice did not gain the traction they were hoping for.

Henry’s most recent Order has been implemented to counter the success of Action4Canada’s campaign, along with backlash from school staff. However, the most recent Order does not change the fact that it is unlawful to force staff to disclose their private medical information and/or to use extortion (s. 346), intimidation (s. 423) of the Criminal Code, and coercion. It is a violation of the Privacy Act and Section 7, 8 of the Charter of Rights and Freedoms.

Henry claims in the Order that she has the authority to violate the human rights and Charter rights of others in the interests of protecting children from the risks of being in the presence of non-vaccinated staff. First of all, at no time does Henry have the authority to violate citizen’s rights, secondly it is now accepted medical and public knowledge that the vaccinated are just as likely to spread the virus and thirdly, children are at nearly zero percent risk of contracting the Covid-19 virus.

The Surrey Superintendent, Jordan Tinney, responded to the Order stating that Surrey would not be requiring staff to provide their vax status because they have already voted no to mandating vaccination. But Tinney goes on to say that if the local MHO requests vax status, they will comply. If Mr. Tinney does so, he will be committing a criminal offense and will be held liable.

Anyone participating in the “collection” of this information or “providing” it to local Medical Health Officers is putting themselves at great risk of personal liability as they are complicit in an illegal act. Anyone mandating vaccination is also committing an indictable offence. Using extortion and/or intimidation to force vaccination compliance is against the law.

In addition, CUPE is in breach of the collective agreement as they responded by providing false and misleading information to their members:

CUPE is misleading members into believing that they will actually be required to provide their vax status and that the employer is immune from liability. This is false information on all counts.

On December 10th, Teri Mooring, President of the BC Teacher’s Federation, responded to Kaardal’s Vaccine Data Collection Notice as a “serious violation of privacy rights.”  This was, and is, an accurate response. However, Mooring is also on record advocating for mandating forced vaccination.

In addition to our previous correspondence with Kaardal, after further research, it has come to our attention that the Vaccination Data Collection Notice of Dec. 10, 2021 contains additional misleading information. On page 4 of that notice, under Legal Authority for Collection, reference is made to section 26(c) and (e) of FIPPA. Under Purpose for which personal information may be collected, section 26 is clear that all criteria (a) through (e) must be satisfied, including d).

26 A public body may collect personal information only if

(d) with respect to personal information collected for a prescribed purpose,

(i) the individual the information is about has consented in the prescribed manner to that collection, and

(ii) a reasonable person would consider that collection appropriate in the circumstances.

Therefore, under section 26(d) (i), if an individual does not consent to the collection of their personal information, the public body may not collect that personal information, and any attempt to do so is in violation of the very Act being presented as justification. It is deceitful to omit a relevant part of a statute, while only including the parts that suit their purposes.

Bonnie Henry’s Order has been interpreted by some School Boards as a green light to mandate vaccination and collect personal, private,  protected information. As explained in this Notice the assumption is incorrect and School Board trustees and superintendents have, and are, exposing themselves to personal liability if they vote in favour of, or support these unlawful dictates.

Action4Canada will continue to defend and protect the rights of citizens against a tyrannical and corrupt government. But we need your help. Please take the necessary actions provided at the beginning of this Notice.

Thank you.
The [email protected]4Canada 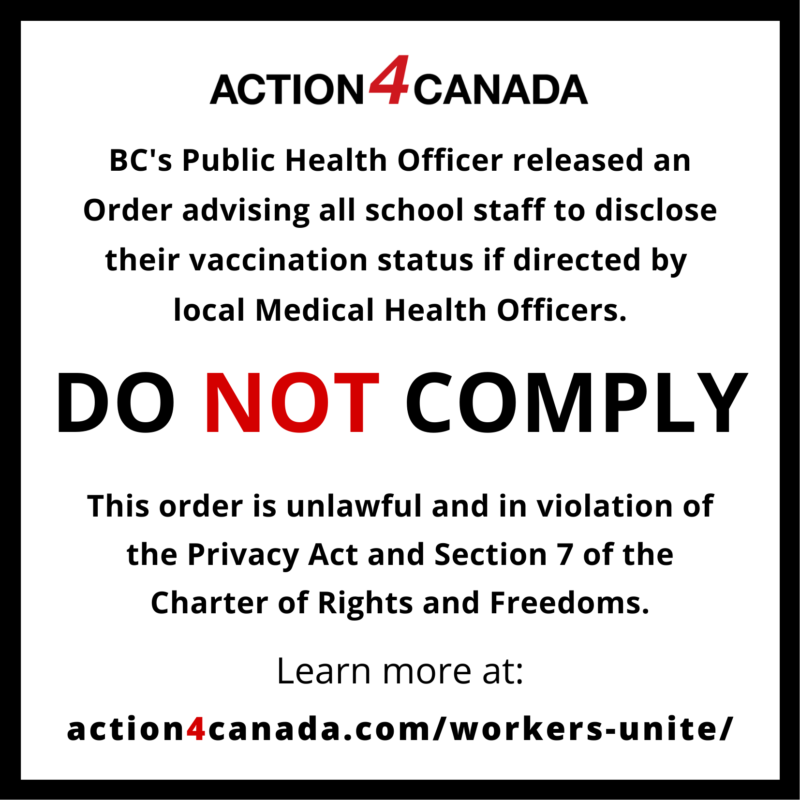