David Lindsay is once again our special guest. David is a co-founder of CLEAR, the Common Law Education And Rights initiative, which focuses on a correct understanding and application of common law (case law), which, surprisingly to many people, originated in the Bible.

David and Tanya will briefly discuss the recent decision made by Judge Ross, give an update on filing criminal charges and then David will provide an informative and educational introduction to his new webinar series on our common law, the Coronation Oath and the Constitution. David will clarify the difference between “British common law” and “sovereign citizen/freeman of the land common law”.

David has developed an extensive 12-13 part webinar, with over 1,200 PowerPoint slides, providing Canadians with the truth on a wide variety of Constitutional issues. This will be the most comprehensive and educational presentation on Constitutional and freedom issues available in Canada. Read more and register for David’s webinar series HERE. 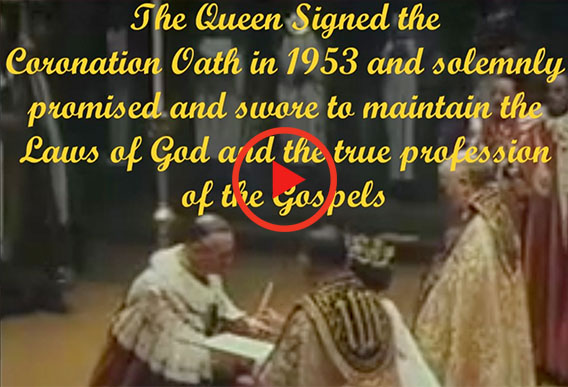 In the above video (beginning @ 29 mins), David explains the importance and relevance of the Coronation Oath. David covers your property rights, personal rights, politicians, Canadian judges and more. The Coronation Oath is a living document and a true hidden treasure, and one that the globalists would prefer you didn’t know about. Read More.

All societies must have some form of Supreme Law – either made by man or by God. Canada’s is, fortunately, created by God.

The Coronation Oath has formed the basis of the entire Commonwealth and the influence of our common law, and supremacy of God. David will discuss the importance of how and why power is obtained by the Monarch in Canada, and her limitations to that power.

The entire swearing in ceremony of the Coronation Oath is Christian based, not secular. In February 1952, Princess Elizabeth formally proclaimed herself Her Majesty Queen Elizabeth II, Head of the Commonwealth and Defender of the Faith. Then in 1953 Queen Elizabeth solemnly promised and swore an oath, the Coronation Oath, to maintain the Laws of God and the true profession of the Gospel in the governance of the people of Canada. Therefore, any subsequent laws that violate God’s law are of no force or effect and must be rescinded.

On August 29th, 2022 the Supreme Court of British Columbia ruled on the Defendants’ motion to strike the action brought by Action4Canada and the ten other Plaintiffs. The Defendants had requested that the claim be DISMISSED without leave (permission) to amend it because they felt it was frivolous, an abuse of process, and demonstrated no cause of action.
The Court REJECTED the Defendants’ request to dismiss based on the fact that the case has merit. Read More

Odessa Orlewicz, Liberty Talk Canada, and Tanya discuss the decision of Judge Ross, the next steps and what’s up with the agitators who are consistently misleading Canadians in regards to this case. 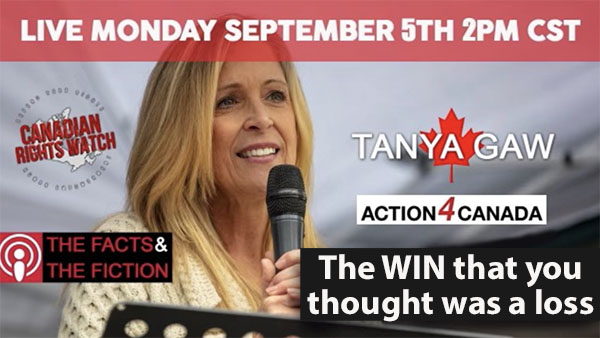 Join the live show on Monday, September 5, 2022 at 12pm PST with George Roche from Canadian Rights Watch and Tanya Gaw. We will take a deep dive into the decision of Judge Ross and also have some discussion on the multiple cases that have been filed across Canada. There have been some strong wins, cases in appeals and those yet to be filed.

This is a time unlike any other. A dark force has entered the land but we are on the winning side and It is critical that we stand strong, persevere and stay the course until we are triumphant!