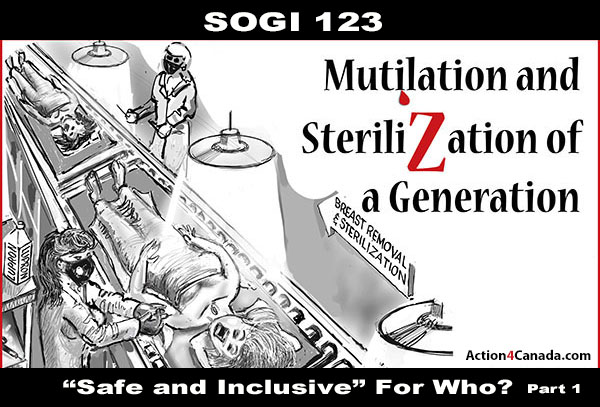 The LGBTQ radical sex activists who are lobbying government and pushing the trans agenda in education, are deceiving people by claiming that children who have gender dysphoria are at a higher risk of suicide, and therefore fast tracking transitioning is the only possible solution. The truth is the complete opposite: individuals that transition have a 19X higher rate of committing suicide.

The sad fact is that if the UN Comprehensive Sexuality Education (CSE) wasn’t being taught in the schools to begin with, and children weren’t being indoctrinated en masse, then this whole issue would not even exist. Prior to CSE nearly zero percent of minors suffered with gender dysphoria. That’s right…ZERO percent.

This is a manufactured problem brought on by individuals who have unresolved childhood issues. They are projecting their adult sexual proclivities onto children. Prior to CSE, the majority of the small percentage of minors who did struggle with gender dysphoria, would recover after puberty if they were not interfered with.

Tanya Gaw, the founder of Action4Canada provides a thorough presentation and analysis on the Comprehensive Sexuality Education (CSE), known as SOGI 123 in BC and Alberta, that is being integrated into the Canadian education system. This ‘educational’ resource originated at the UN and is intended to sexualize children at the earliest age possible. Tanya also exposes those who are behind this agenda.

Abigail Shrier is the author of the book “Irreversible Damage: The Transgender Craze Seducing Our Daughters”.

Please take the time to listen to Abigail’s informative presentation explaining how the radical trans agenda has infiltrated society, the media and our schools, causing a social contagion. The results of which is a shocking number of young people being exploited and led to believe they were born in the wrong body.

The Lies of Transgender Medicine

“Affirmation Generation: The Lies of Transgender Medicine” features the heart wrenching stories of six young de-transitioners (three men and three women). They sought medical help, but instead were irreversibly harmed by their doctors following the one-size-fits-all “gender-affirming care.” www.AffirmationGenerationMovie.com

According to the American College of Pediatricians (ACP) and numerous other experts, Gender Ideology Harms Children.

The ACP urges healthcare professionals, educators and legislators to reject all policies that condition children to accept as normal, a life of chemical and surgical impersonation of the opposite sex. Facts – not ideology – determine reality.

Chloe Cole, an 18-year-old de-transitioned woman, gave a powerful testimony on Sept 20 against the “gender affirming” model of care that led to her irreversible medical transition as an adolescent. Chloe spoke at a press conference in front of the U.S. Capitol in support of Rep. Marjorie Taylor Greene’s (R-GA) new bill, the Protect Children’s Innocence Act, that aims to shield minors from accessing the permanent, body and life-altering medical treatments they may later come to regret.

View the following Graphic Images exposing what is happening to minors at the hands of surgeons.

As a result of Action4Canada leaders and volunteers working to bring public awareness to the SOGI 123/CSE agenda to sexualize children using the education system, the media report 1 and report 2; the government; the teachers union; and the Canadian Federation of Library Associations, are all attempting to put a spin on what is being brought to light. There is no way a rational person, after reviewing the evidence, could believe that this is about diversity and inclusion. They can no longer hide behind the amendment to the Human Rights code as it does not supersede the criminal code, which is very clear in regards to grooming children and exposing them to pornography and sexual performers, being against the law.

Action4Canada sent out a press release in response to the media’s recent misinformation campaign. Bad press is good press in this instance. Since the media named Action4Canada, it gives the public the opportunity to visit our website and the flyer in question, investigate the material for themselves, and come to their own conclusions.

Solution: Help candidates who align with your values run for office, and then get out and VOTE!

Join an Action4Canada Chapter to help support and recruit candidates to run for office. We MUST remove and replace every elected official who has been complicit with this deviant agenda that is corrupting the hearts and minds of our children. BC, Manitoba, Ontario and PEI are having Municipal/School Board elections in the upcoming weeks. The municipalities are key to the UN Agenda and we have the power to take back our towns and cities…but we need you!

Here is an example of a clear opportunity to run candidates and win elected positions. In BC, 37 candidates running for mayor automatically won because they stood unopposed. This is why Action4Canada’s goal is to be in every town and city across Canada. Together we CAN take back every level of government.

Join a Chapter today or apply to become a Chapter Leader. Join or apply HERE 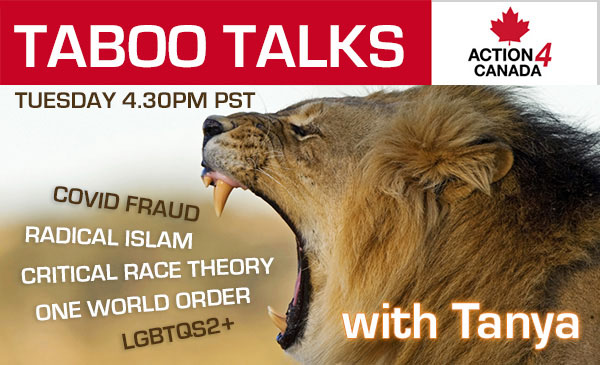 Action4Canada meets every Tuesday via zoom to help further equip Canadians in defending their rights and freedoms, and provide education on how to best utilize the Action4Canada resources. A4C also covers current events and taboo issues that the government would prefer we didn’t discuss. This week join Tanya for a time of Q&A. Whatever is on your heart, let’s talk about it.