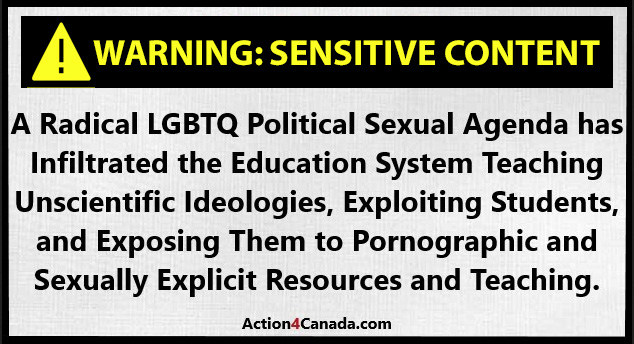 Our Children Can’t Turn Away, Neither Should You

“Please” Read This Report in its Entirety & Take Action!

To begin this week’s newsletter, we want to clarify that when we refer to the LGBTQ we are not referring to the gay and lesbian community. The LGBTQ platform has been hijacked by radical, political activists who are using it to advance a global agenda to sexualize children, interfere with parental rights, eliminate the natural family and normalize pedophilia. They are preying on vulnerable children by systematically indoctrinating them with transgender ideologies, which are intended to create identity crises leading to depression, psychosis and a high risk of suicide.

Transgender people make up only 0.33% of the population, yet the majority of citizens are being victimized and forced to submit to the Trans’ radical ideology. For the sake of our kids and the future of this country, we can no longer comply to their unreasonable demands. Political correctness be damned!

Action4Canada has created a new Notice of Liability advising Trustees, Ministers, Teachers, Librarians etc, that they will be held personally liable for exposing minors to any form of pornography/sexually explicit material, activities or organizations promoting sexual deviancy and the exploitation of minors.  Use the following Notice of Liability and demand that; the SOGI-123 learning resource be immediately and completely removed from libraries and the education system; all of the books listed, including titles by the same authors, be immediately removed; and that all educational facilities including libraries cease and desist promotion of any and all activities, performers and clubs that exploit vulnerable minors. Learn More.

Parents and concerned citizens, we cannot ignore this message. Our children and youth are being subjected to twisted ideologies using social justice as a means to indoctrinate and groom them. From the highly politicized radical LGBTQ agenda to the made up critical race theory the government has a target on our children’s heads and we need to step up and put a STOP to it.

Do NOT Turn a Blind Eye

Children and Youth are being Deliberately Sexually Groomed 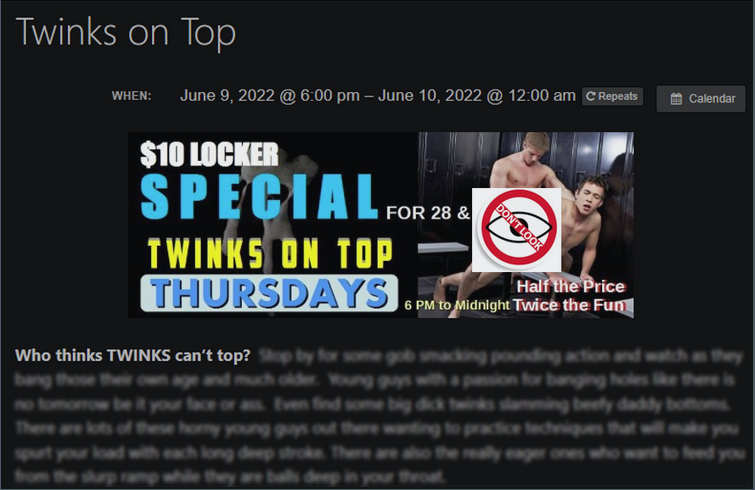 Under the guise of harmless organizations touting noble causes supporting children, sexually deviant agendas such as celebrating Pride, have infiltrated schools across Canada. No longer Pride day, or Pride week, or even Pride month, the LGBTQ Agenda is now fully integrated into the entire school year via the curriculum. Pride is a gateway that can lead minors towards organizations who are deeply involved in sexual exploitation.

One such organization is Youth for a Change who describe themselves as a group of young lesbian, gay, bisexual, trans* and queer youth (13-22) who want to make a difference in the lives of youth. “We are advocates, activists and educators…who…offer workshops on Homophobia and Transphobia, Gender Identities; attend Pride; train on lobbying politicians, Council and School Boards; monitor school Board policy on “Anti-Homophobia and Transphobia; campaign to fly the Pride Flag; take leadership roles in other organizations, such as Gay Straight Alliances in schools; lobby for gender neutral facilities; and so much more.

The Origin of Transgenderism

Alfred Kinsey is known as “The Father of the Sexual Revolution”. The sexualization of children we are seeing today originates from Kinsey’s research which portrayed people as amoral and sex-driven. Much of his work was funded by the Rockefellers and it fundamentally changed the way our culture views sex. Kinsey solicited and encouraged pedophiles, at home and abroad, to sexually violate from 317 to 2,035 infants and children for his alleged data on normal “child sexuality.” Many of the crimes against children (oral and anal sodomy, genital intercourse and manual abuse) committed for Kinsey’s research are quantified in his own graphs and charts.

This is a brilliant and thought provoking interview with Jordan Petersen and Abigail Shrier, Wall Street Journal Reporter and author of Irreversible Damage: The Transgender Craze Seducing Our Daughters.

Confusion about gender ideology among adolescents has been fueled by unscientific political ideological propaganda. Rapid onset gender dysphoria is on the rise due to the indoctrination of children in the public school system, on social media, and television. All these systems are working in unison to plant seeds of doubt and are causing youth to question their biological God-given sex at birth.

Transgenderism was once diagnosed as a psychological disorder by trained medical professionals but has now become a peer driven “self-diagnosed” social contagion. That’s right, no psychologist or trained specialists required. A child can now self-diagnose and then take steps to transition without their parent’s knowledge or consent. Rather, they have the enthusiastic support of radical LGBTQ activists who have infiltrated the education system. Children are then treated by doctors whose ideological commitment comes before their medical commitment to “first do no harm.”

Transman Scott Newgent is on a mission to bring awareness to the destructive transitioning phenomenon of children. His own personal testimony of transitioning at the age of 42 includes a post-operation 17 month journey of sheer survival and discovering that transgender health care is experimental and that large swaths of the medical industry encourages minors to transition due, at least in part, to fat profit margins.” Scott’s video includes statistics as well as graphic images of surgeries that have gone horrifically wrong.

Sex Change Regret is a growing response to the political agenda that has created a mass social contagion founded on lies and misinformation. Walt Heyer is a former transgender who refers to what is happening to children, being indoctrinated and then subjected to harmful drugs and surgeries, as child abuse.

Traditionally, transgenderism occurred because an individual had experienced some form of abuse in childhood and/or suffered with psychological problems. Walt provides his own personal testimony to confirm this. However, the current rise in children struggling with gender dysphoria is directly related to a mass social contagion as a result of the indoctrination in the schools. There is not a mass exodus from one’s biological sex in the age ranges of 30, 40 or 50 year olds, it is strictly happening amongst teens and young people in their early twenties.

In preparation for this, the radical LGBTQ activists worked to push a bill through that would prohibit parents from providing their children with counselling to undo the damage the schools have inflicted. Justin Trudeau recently passed Bill C-4 which will imprison parents, caregivers or counsellors for up to 5 years if they do not affirm a child’s dysphoria should they come home from school claiming they are trans, bi, pan, etc.

WHAT IS A WOMAN? Trailer

It’s quite elementary dear Watson. There are only two sexes, male and female. A woman is an adult female who was born with two X chromosomes in all her cells. A man is an adult male who was born with X and Y chromosomes in their cells. The science is clear. Therefore, do not allow yourself to be controlled by the government’s narrative, or be compelled to stay silent in response to the transmania.

Make No Mistake, This is a Top Down Problem

Since coming into office Justin Trudeau has made it a top priority to implement the radical LGBTQ political agenda. Sexual deviancy has become an obsession with all major parties. Our economy, resources, and security of our borders have taken a back seat.  Whatever happened to Pierre Elliot Trudeau’s statement, ‘There’s no place for the state in the bedrooms of the nation’.  View examples revealing just how sick and broken the government of Canada is HERE.

Take Your Kids Out of Schools

What are you willing to sacrifice to protect your kids?

If you can…Pull them out of the public schools and Universities. Run or join a home school group. Get involved in writing letters and serving Notices of Liability. Decide to run for office as a School Board Trustee, Mayor or City Council.

NOTICE: There will be no Empower Hour this week on June 15th 2022

The next Empower Hour will be on Wednesday, June 22, 2022 4:45pm PST/7:45pm EST where we will be doing a deep dive into the UN/WEF’s Agenda to use our children as Agents of Change and how to remove these vile materials and agenda’s from our education system. Register in Advance

Do NOT give up or be discouraged by the information provided in this report but instead make a commitment to do everything in your power to assist us in turning this around. Change and Justice are coming!

The bible says in Luke 17: 1.2, “It is inevitable that stumbling blocks will come, but woe to the one through whom they come!
It would be better for him to have a millstone hung around his neck and to be thrown into the sea than to cause one of these little ones to stumble.