Solutions to Financial Corruption and Censorship 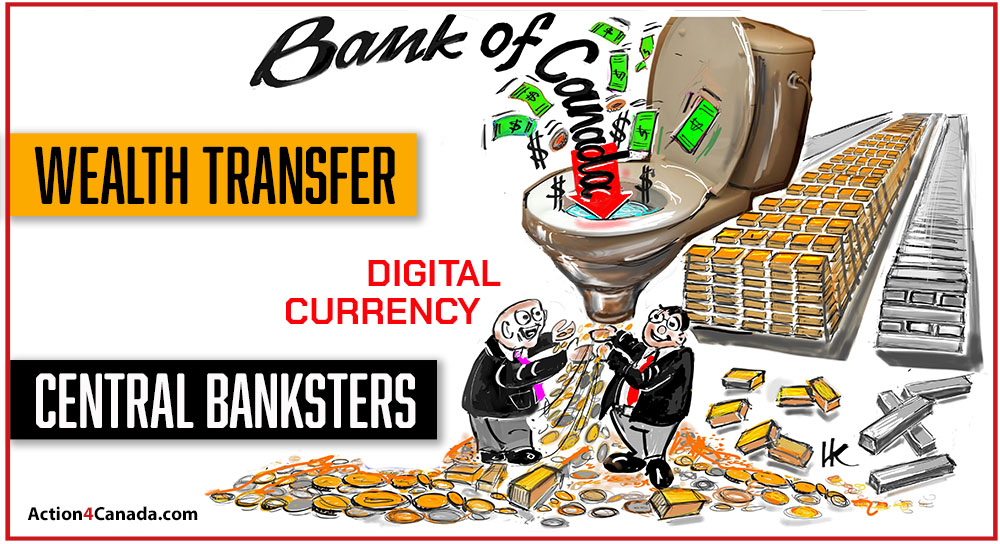 The great wealth transfer kicked into high gear in 2020 and Action4Canada has been working diligently to make Canadians aware. The Globalist Oligarchs, Central Banksters and IMF (a pillar of global apartheid) used the Covid fraud to effortlessly sabotage western nation’s economies, making useless their dollar, with the intent to implement a Digital ID banking system to control citizen’s every transaction and life ‘choices’. This plan also provides the fraudsters the opportunity to enrich themselves so they can buy up precious commodities such as gold, silver and oil. In 2022 alone, the central banks bought 673 tons, more than any other annual total since 1967.

The Canadian dollar was once backed by gold, which helped it maintain its value, but in  1933 the gold standard was officially abandoned. Fiat currency is a piece of paper and it has completely lost its value due to the massive debt accumulated by the government’s reckless spending.

But there is hope. Free-thinking human beings and independent sovereign nations are two of their biggest enemies. So let’s get busy, work together and defeat them at their own game. There are billions more of us than them.

Fighting Censorship and the Central Banksters

Tiago Henriques, Died Suddenly News and Artificial Intelligence Expert, joins Tanya once again to provide an update on his new social media platform and to do a deeper dive into the government and Bank of Canada’s role in orchestrating the massive wealth transfer. Tiago and Tanya will also provide tangible steps you can take as an individual to thwart the Bankster’s agenda. For example: use cash; remove your money from the bank and invest in commodities such as gold and silver; and remove your belongings from safety deposit boxes. Read More and share the Empower Hour invite HERE.

Rocco Galati: Lawsuit Against the Bank of Canada

Rocco Galati, Canada’s top constitutional lawyer, does not shy away from government corruption. In fact, he steps right into the middle of the arena to expose it and pursue justice. Mr. Galati does this out of a sense of personal duty and commitment.

In the video above, Rocco explains that “over the years the government has conspired with foreign private banks and handed over the functioning of Canada’s public banks with respect to currency, interest, positions and policies. Foreign banks cannot give orders to our bank. It’s conspiracy, which is in violation of the Constitution and is an indictable offense. Under our Constitution the government and the executive cannot refuse to govern. They have to apply the law but by handing control over to foreign entities they have given the application of the law surreptitiously to foreign private banks.” The government cannot relinquish sovereignty and we must continue to hold them accountable for their malfeasance.

Rocco further stated that he involved himself in certain cases because “he saw an attempt to pervert and subvert our independent judiciary, which is the last bastion of balancing the rights of the citizens as against the government, and making sure that the government doesn’t turn into a dictatorship.” Parliament must keep within the limits of its powers and we need to support Rocco in all of his efforts to ensure this happens.

It’s that simple! This is how fragile and disposable fiat (cash) money has become as a result of the government and Bankster’s intentional mismanagement of the Canadian public banking system and our gold reserves, as well as their out of control spending. In 2015 Trudeau made it a priority to sell all of Canada’s gold holdings in addition to selling Canadian gold mines to China. Canada stands as the only G7 nation that does not hold at least 100 tonnes of gold in its official reserves and therefore, we have nothing to back us. So, do what you can now to buy precious commodities.

Dying Suddenly. This is a very difficult video to view but for anyone who still doubts, or knows anyone who doubts, that the jabs are causing death and destruction, please watch and share this video. Help save lives by educating those who are still being deceived by the government and the media.

Be encouraged, the “Quiet Right” is rising. By resisting and exposing the government corruption and creating alternatives, a new counterculture is developing and disrupting left-wing institutional capture. History repeats itself time and again, and the time is now for civil disobedience and non-compliance. We must “rebuild the structures that provide the basis for healthy, integrated human development: families, schools, churches, neighborhoods.”

Join an Action4Canada Chapter today, or register to become a leader, and get involved at the community level with the fastest growing resistance movement in the nation. Together we will take back our towns and cities and this nation.