It’s time to serve the Media Notice of Liability via registered mail to several bad actors at CTV Ottawa. Please also take the time to email and call the names listed to let them know how you feel about their deceptive reporting that is promoting hate, and further distrust in the media industry. Reporters and producers are complicit to treason through their silence and lies.

Trudeau’s hired mouthpiece, CTV, has reached a whole new level of spin in a desperate attempt to paint a negative narrative on the Trucker’s Convoy in Ottawa.

In yesterday’s “report” they liberally used inflammatory words and phrases such as “disturbing scenes”, “tense moments”, “visible and audible shift in tone”, “sparking widespread outrage”, and “the atmosphere today was more volatile”, in an attempt to force the viewer to see the whole protest in a negative way.

They went on to interview Catherine McKenney, an Ottawa Councillor, who continued with the inflammatory theme saying “there were elements of extremism” and “calling for them to be removed”.

They also inflated minor incidents into scenes of what they called “desecration” and “vandalism”. Their definition of vandalism consisted of Canadian flags and protest signs being put on Terry Fox’s statue.

They also prefaced with, “viewers may find these images disturbing” when they “reported” on the “anger and aggression towards journalists” which consisted of a clip of a woman telling them to go away.

What goes around comes around they say. In an impressive move the convoy organizers banned the legacy media from their press conference after they tried to sabotage the GoFundMe with fake news stories.  See the full press conference below. 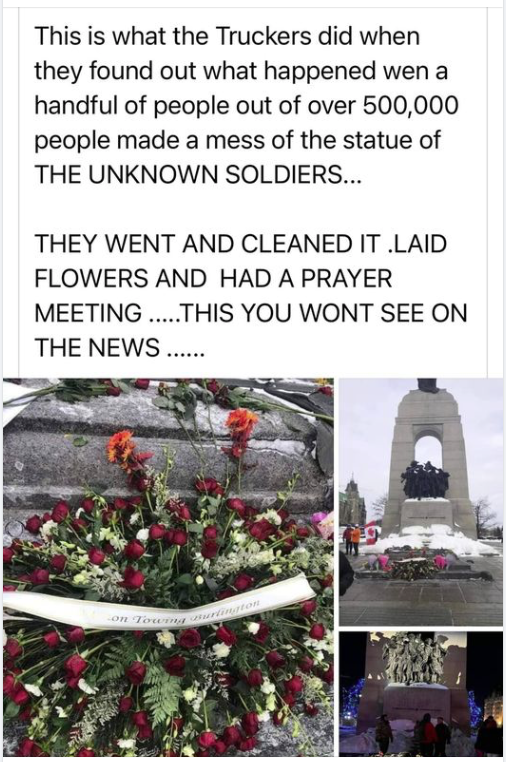 Labelled “vandalism” when the Truckers do it, celebrated when the Liberals do it…

Despite CTV’s attempts to sway opinion, in their poll on whether people thought the protest should end, the results were an outstanding NO, with 72% still supporting the truckers. 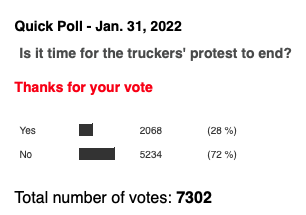