If you are planning to travel either within or outside of Canada then you will be interested in our newest Notice of Liability (NOL) that addresses the ongoing assault against Canadian citizen’s guaranteed right to travel “without delay or hindrance and to afford the bearer such assistance and protection as may be necessary.” This includes protection from the illegal and unlawful mandates and actions of our own government.

The document includes step-by-step instructions on how to serve the NOL, as well as detailed guidelines on how to respond to Border Services Officers, Health Officials, the RCMP and airline personnel, in response to the unlawful travel mandates, including the ArriveCan App, for both domestic and International travel.

Action4Canada requests a $20 donation for the Notice of Liability to support our on going work. A4C has compiled this information to assist you in upholding your right to unhindered mobility and to be treated with respect and dignity.

How to Assert Your Mobility Rights

Remo Gaita joins Tanya to discuss travel: cross border; International; and domestic; as well as Action4Canada’s newest Notice of Liability related to mobility rights. A very informative and helpful session, practical tips, and what to expect when returning to Canada. Learn more and share this Empower Hour Invite 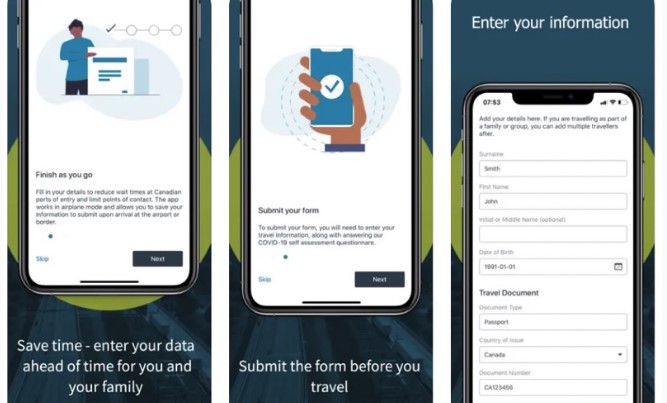 It comes as no surprise to find out that the ArriveCan App is being met with significant opposition due to yet another massive government overreach into Canadians privately protected information. It also breaches our medical and constitutional rights and violates the criminal code.

The Privacy Commissioner has launched an investigation over  “concerns with respect to the collection of personal information through ArriveCAN and subsequent use of that information.”

Up to 40% of travellers are filling out the App incorrectly, or not at all, and despite what the government says about it reducing processing times, it is in reality causing long lines and delays.

Mayors want it scrapped as does NDP leader, Brian Masse, who says, “The ArriveCAN is about tracking and has nothing to do with public health. It’s being used as a back door to permanently track all border crossing.”

So many good reasons for Canadians to dig their heels in and just say “NO, I do not consent!”

Is it Safe to Fly?

According to MEP Christine Anderson, pilots may no longer be fit to fly after taking the jab and pose a risk to the safety of their passengers. Christine says, “We are talking actually about a safe flight. Which may no longer be the case….Can you imagine first people are being forced to get a vaccination to only then find out that it might actually be the dumbest thing they ever did.”

Listen to pilot Cody Flint’s harrowing story of having to make an emergency landing due to being vaccine injured.

Laura-Lynn Tyler-Thompson interviews Rob Simpson, a former WestJet pilot. Rob explains how he discovered that WestJet’s own doctor failed to advise vaccinated WestJet pilots about certain Transport Canada rules relating to their vaccinations. These rules say they cannot take any experimental, unapproved drugs or medical treatments while working as pilots, or they will have their pilot’s licenses revoked or suspended.

Mr. Simpson was fired from his job as a pilot earlier this year, and he is currently spearheading a group of WestJet employees who are filing a lawsuit against WestJet over the vaccine mandates.

A4C Youth Speaks Out Against the Experimental Vax

Mathew educates us about what is really going on with the experimental injections and entreats us to educate friends and family so we can put a stop to the harms these jabs are causing! Matthew closes by quoting Thomas Jefferson:

“If people let the government decide what foods they eat and what medicines they take, their bodies will soon be in as sorry a state as are the souls who live under tyranny”.

Due to some tech issues, the Empower Hour video interview with Rocco had to be re-uploaded. It is packed with great updates and critical information on the cases Rocco has filed, and includes reported wins as a direct result of filing each Statement of Claim. Action4Canada’s case is currently awaiting a decision from Judge Ross on the Motion to Strike. Rocco advises that it can take up to eight months for a decision so if you are a praying person, please pray for a speedy ruling.

Rocco also mentions the recent legal actions he filed against Kipling Warner, of the Canadian Society for the Advancement of Science in Public Policy (CSASPP) and Donna Toews for libel and slander (defamation) and irresponsible publication. As well as filing legal proceedings against Sharon Greene of the Law Society of Ontario.

Rocco, Tanya and the Action4Canada Team continue to work tirelessly, and with integrity, on behalf of all Canadians, despite these attacks.