42,574 adverse events reported as of March 18, 2022. Health Canada is stating there have only been 318 reports of death and they then try to make that zero deaths by stating: “168 reports of deaths could not be assessed due to insufficient information; 103 reports of deaths are unlikely linked to a COVID-19 vaccine; and 47 reports of death are still under investigation”. So in their eyes there has not been a single death associated with the jabs… Whilst in the US, the VAERS data is now showing 26,059 deaths.

We know that only 1-10% of adverse reactions get reported and in Canada the paperwork required to submit them is purposely time-consuming and doctors do not get paid to complete it. Plus they are discouraged from doing so.

Which makes the true figures likely somewhere between 1 in 20 to 1 in 200. Yet Health Canada, and all the Health Officers, still say these jabs are SAFE.

In April 2021, Dr Hoffe, from a small community in British Columbia became concerned when one of his patients who he’d give the Moderna shot to died and three others were permanently disabled. He alerted Interior Health and submitted vaccine injury reports but those reports mysteriously disappeared. He was threatened when he went public and was suspended in his additional role in the only emergency room in that community. 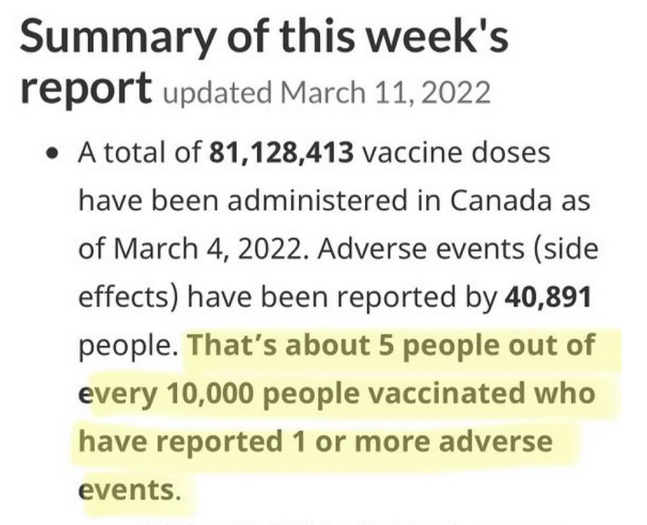 This website does a comprehensive breakdown of the US Vaccine Adverse Event Reporting System (VAERS) data each week.

Medscape – How concerned are you about Adverse Events in relation to the vaccines?

Over 450 comments from medical professionals regarding the adverse reactions they have personally experienced.

Dr. Byram Bridle, a pro-vaccine Associate Professor on Viral Immunology at the University of Guelph, gives a terrifying warning of the harms of the experimental treatments in a new peer reviewed scientifically published research study on COVID-19 shots: