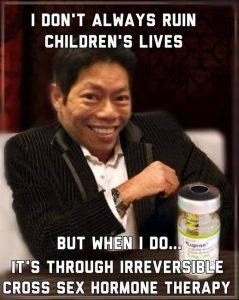 Meet Wallace Wong, the BC doctor who has referred a large number of healthy children and adolescents to the gender clinic at BC Children’s Hospital, where they are typically injected with harmful drugs and given synthetic hormones that can sterilize them and put them on a path toward surgeries that will permanently mutilate their body.

Wallace Wong, the BC doctor who went from having under a dozen children in his gender clinic in 2010 to over 1000 children in 2019. Over 500 of whom, are children from the ministry of child services. Learn more

Should an investigation commence? If your answer is YES, than please Click Here and sign the petition calling for a National inquiry.

Action4Canada has launched many Calls to Action in response to the indoctrination of children via the education system which is promoting harmful LGBTQ ideology resulting in a mass social contagion. Confusing otherwise healthy children and leading to unprecedented numbers deciding to radically transition.

The UN’s mandated LGBTQ Comprehensive Sexuality Education program is the foundation for this indoctrination. However, citizens in countries around the world are recognizing the harmful effects this is having on children and are successfully commencing inquiries and working to have legislation passed to prohibit minors, under the age of 18, from receiving hormone therapy or medically transitioning. Further steps are being taken to remove the UN’s CSE program. Canada needs to follow suit.

Jenn Smith, who was born a male and now identifies as transgender but not as the opposite sex, has initiated an E-petition calling for a National Inquiry into the mass medical gender transitioning of vulnerable and at risk children and adolescents in Canada. As a former foster child Jenn Smith understands the pain of being in the foster care system and acknowledges the higher risk of abuse for this vulnerable group of children. Therefore, Jenn has become a tenacious advocate for not only children in foster care, but all children who are being subjected to this abuse.

Derek Sloan, Conservative Party of Canada leadership candidate, has stepped up and is sponsoring this Petition, and agreed to table it before the House of Commons once the petition is closed (Nov.5).  We need as many signatures as possible. Sloan is the only candidate taking on the tougher issues and making no apologies. Political correctness and virtue signalling are not on his radar. What a refreshing change. A common-sense politician who cares more about the protection and well-being of our children than the opinions of a minority of hateful activists.

Note: the petition refers to the residents of Abbotsford but is open to “every” Canadian citizen to sign. Your signature remains confidential to the public. Once you sign the petition you “must” reply to an automated email verifying your identity. 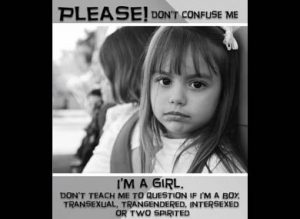