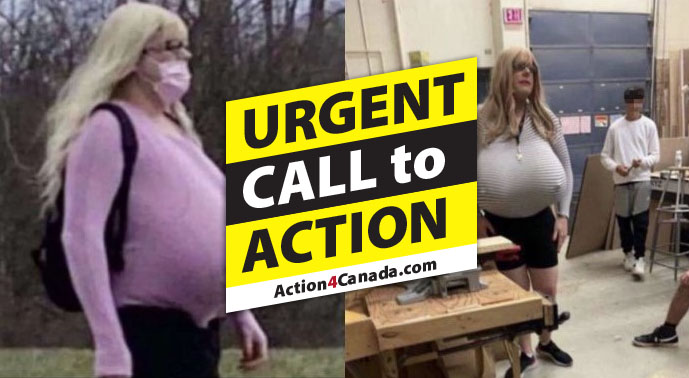 The image above, taken by a student, is of a teacher who is wearing a massive prosthetic bust to class at the Oakville Trafalgar High School in Ontario. You may think that this can’t be real and is part of some kind of sick joke, but it isn’t a joke and the Halton District School Board is actually “standing behind” this “accepted” transgender teacher. Sadly, this is not an isolated incident as other such obscenities are taking place at schools across Canada. Students are uncomfortable. They recognize it isn’t normal but feel helpless to do anything about it. Sexual exploitation and indecency are Criminal Code offences.

This is due, in part, to a decision that was made by the World Health Organization on May 25, 2019 to remove transgenderism from the list of mental disorders. Gender identity disorders were reframed as “gender incongruence” to remove “misconceptions” about being transgender as well as empower and liberate transgender people around the world.

Justin Trudeau, and every Premier in this country, have fully embraced the World Health Organization’s decision and are responsible for allowing this depravity to infiltrate our government institutions. Sexually grooming children and pedophilia are criminal code offences and we must unite and oppose this agenda.

Contact the Halton School Board (HSB) and Oakville Trafalgar High School and let them know how you feel about this situation.