July 1st is quickly approaching and in advance of it, Action4Canada wants to take this opportunity to wish you and your family a very Happy Canada Day!

There are Celebrations scheduled in Ottawa on Parliament Hill and at the BC Legislature in Victoria. (see flyers below)

The Liberal government has been working overtime to divide this nation and pit one group against another. Other political parties have joined the assault against Canadians to pander to minority groups. Because of it, our Constitution is being plundered and our rule of law violated to the extent that we no longer espouse equal justice or equal law for all. It has become a thing of the past and in its place growing resentment, fear, and chaos is taking hold.

In response, many individual Canadians and organizations are uniting with the sole purpose to rise up against the tyranny and corruption within our government.

Theodore Roosevelt said, “nothing in the world is worth having or worth doing unless it means effort, pain, difficulty… I have never in my life envied a human being who led an easy life. I have envied a great many people who led difficult lives and led them well.”

We need to fight for our freedoms because nothing worth having comes without a cost!

“Those who expect to reap the blessings of freedom, must, like men, undergo the fatigues of supporting it.”
― Thomas Paine

The freedom of speech…

Whoever would overthrow the liberty of a nation must begin by subduing the freeness of speech.”
― Benjamin Franklin

The freedom of thought…

The freedom of movement. Free of surveillance and tracking.

Freedom of movement is the very essence of our free society — once the right to travel is curtailed, all other rights suffer.
William O. Douglas

The freedom to protect our borders which were established by God.

Acts 17:26 says, “and He made from one man every nation of mankind to live on all the face of the earth,
having determined their appointed times and the boundaries of their habitation,”

The freedom of the press, assembly, and financial freedom

“What is the use of freedom of the press if the government is in possession of all the printing presses,
what does freedom of assembly avail if all the meeting places belong to the government?
In a society in which there is no more personal and economic freedom,
even the freest form of the state cannot make political independence possible.”
Eugen Richter

And last, but not least, the freedom of religion must be defended vigorously. Canada was founded on Judeo-Christian principles and this is the nucleus from which our freedoms exist. Canadians have consistently been fed a lie that we are a secular nation with no core identity. And when repeated often enough, a lie becomes a dangerous weapon capable of toppling great nations.

Justin Trudeau has made his disdain for Canada’s system of governance well known and has not hidden his admiration for the Chinese communist regime and other dictators, such as Fidel Castro.

This Canada Day, Action4Canada wants to encourage you to re-think the narrative and consider why our nation is set apart from totalitarian, communist, and extremist regimes who oppress their people, dictate thought and impoverish their citizens. Action4Canada is committed to speaking the truth regarding this issue and dispelling any new normal that does not support our heritage. Christian biblical principles and the 10 commandments formed the Magna Carta and our Constitution. It is the central reason our system of governance is superior to all others. Whether you believe in God or not, you have the freedom to do so without fear of persecution.

Canadians have a duty, a right, and an obligation to protect our National Sovereignty, National Security and Rule of Law. 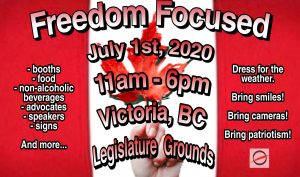 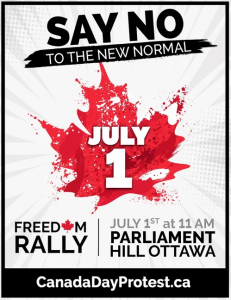