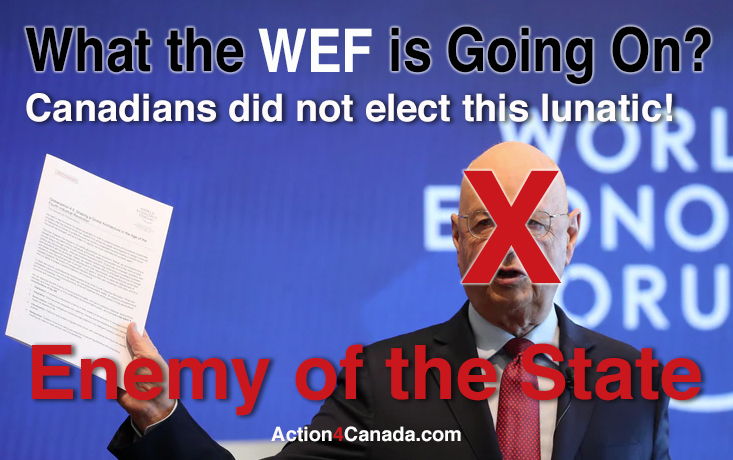 Unelected self-appointed tyrants have strategically placed themselves into positions of power and authority. In doing so they believe they can take over the world and have complete and total control of humanity. They don’t see themselves as mere mortals but transhumanists, gods, who are superior to all mankind.

The World Economic Forum was created by Klaus Schwab and he, and his billionaire buddies, have spent years colluding and strategizing to implement a Global government under the guise of ending world poverty and climate change, “controlling” health care, and creating a Utopian world.

In December of 2015, 193 countries unanimously adopted the 17 Sustainable Development Goals (SDGs) at the United Nations Headquarters and, over the next 15 years, began framing their agendas and political policies to end poverty, protect the planet, and ensure prosperity for all by the year 2030.

The globalist’s interpretation of their Utopian world, however, is much different than what is unfolding. The reality is mass poverty; population control through genocide, sterilization and abortion; digital ID; a social credit system; a One World Government and a satanic One World Cult.

and then we will provide you with solutions! Read on!

Register for the WEF PowerPoint Presentation

Corinne Beresford is our special guest on the upcoming Empower Hour. Corinne will provide a comprehensive PowerPoint presentation revealing what our government has in store for all of us via the WEF/UN Agenda 2030 and their politically correct Sustainable Development Goals, that have nothing to do with our Sustainability. Read More and Share Link HERE 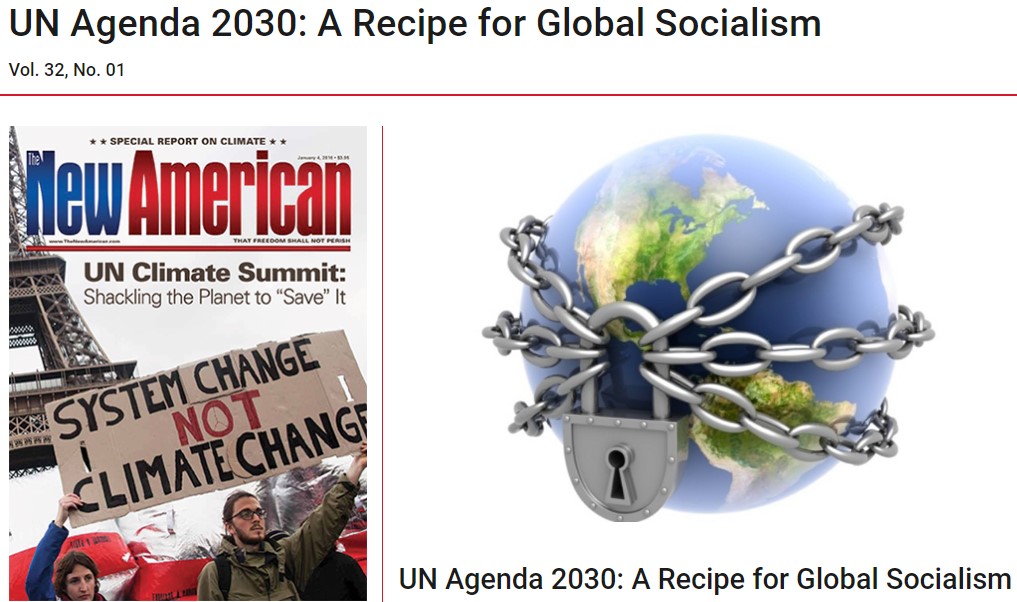 “When Agenda 2030 was adopted in New York City on September 25, the UN plot to re-engineer civilization was ushered in with a “thunderous standing ovation.” Every one of the 193 UN member governments on the planet — from murderous communist and Islamist dictatorships to those ruling what remains of the “Free World” — vowed to help impose the UN’s controversial goals on their subjects. It all sounded so wonderful to some of the world’s most brutal dictators that they could hardly contain their glee.” Alex Newman

An entire Goal of Agenda 2030 is devoted to ensuring that all children, everywhere, are transformed into what the UN calls “agents of change,” ready to push forward the plan for the new global order. “Children and young women and men are critical agents of change and will find in the new Goals a platform to channel their infinite capacities for activism into the creation of a better world.”

Fun Fact: China promised to spend $2 billion in foreign countries to meet the UN goals in “education” and “health,” with its funding increasing to $12 billion by 2030.

What! Mattel and Thomas the Tank Engine are in on the 2030 Agenda? Yes they are, as well as many other kids programs. Are you also aware that they are indoctrinating parents, along with their children?

“The 17 Sustainable Development Goals … Thomas & Friends have collaborated with the UN to teach children and parents about 6 of these Global Goals. On this site, you will find video Life Lessons from our favorite blue engine, Thomas, as well as Parent Tips with activities to help talk to young children about why achieving these Goals is important for everyone in the world.”

“All Aboard for Global Goals is a series of videos that introduce early childhood students to the Sustainable Development Goals… This resource is an excellent tool to introduce global citizenship at an early age.  The messages provided in the videos are easy for children to understand.”

Young Global Leaders: Being Groomed in a University Near You!

Is it worth the risk to send young people to University or College to earn a degree right now? Would it be wise to wait?

Universities are a hotbed for promoting the Global Agenda. Waterloo University is a prime example. It is a strong supporter of the SDG’s and even hosts the Sustainable Development Solutions Network (SDSN). Ban Ki Moon, a former Secretary-General of the United Nations, is admirably endorsed by SDSN student leadership.

In 2015, SDSN launched its official youth division, SDSN Youth, to empower youth globally to create sustainable development solutions. Since its launch, SDSN Youth has grown to encompass a team of over 140 young volunteers from over 30 countries, with a wide range of programs that have engaged tens of thousands of young people around the world.

SDSN Youth Canada was founded three years later in 2018, and has since grown to encompass 16 hubs, 400 hub members, and a reach of 3600+ youth (more info and list of Canadian Universities). SDG Coordinators have organized more than 50 events across Canada, including panels, SDG weeks, and impact challenges. The network is also working on creating Canada-wide collaborations between hubs to advance the SDGs.

“Penetrating our Government through Global Shapers”

You’ve heard of the Young Global Leaders? Global Shapers is a second layer of penetration by the transhumanist Klaus Schwab and his World Economic Forum. You won’t believe how deep this goes. Must see & share!

Action4Canada has created two of the most detailed reports on the WEF and WEF Canada available. Visit:

17 Goals Translated – What They Really Mean

It Has Been Said…

Have you heard about the indoor vertical farming industry? It is a reported as a “highly-innovative and efficient method” of farming and is being funded by Bill Gates and pushed by the World Economic Forum. It is intended to replace conventional outdoor farming.

The globalists are taking drastic measures to control the food industry while running much of it under the radar. If they control the seeds they control the food, and if they control the food they can use the digital ID to control consumer access to the food. Whilst a rash of fires suddenly destroyed food processing, meat, and fertilizer plants, during a time where farmers are hurting and supply chain issues are kicking in, an entire traceable food infrastructure system has already been built in multiple cities and is making its way across the globe. Read More

It all sounds really good…on paper. But they neglect to inform you that if you are not a good boy or girl, and fully submit to their ‘Agenda,’ then you will lose your privileges. That’s right, privileges. It is no longer considered your right to own a home and power it. If your ‘credit score’ is low, no power for you. But you won’t read about that detail in the SDG’s.

You may recognize this degenerate. He is certifiable…and dangerous. He is the advisor to Klaus Schwab and a co-conspirator in the global crimes against humanity. He isn’t shy about telling you that you are too dumb to handle your own finances and investments.

So What is the Solution?
Freedom is Ours for the Taking!

First – citizens MUST embrace the fact that they have God-given rights that cannot be infringed upon.

Secondly, we MUST focus on our youth. Action4Canada is creating a Youth Freedom Movement. We have commenced our first ever youth leadership program and are going into week 7 (of eight) and the results and feedback from the youth is amazing. We are focused on educating our youth, giving them a voice and teaching them how to effectively use it.

Thirdly – together we can put a stop to this fraud at the grassroots level. Join an Action4Canada Chapter and help support and recruit candidates to run for office at all levels of government. We MUST remove and replace every elected official who has been complicit with the egregious crimes committed against the citizens of this nation.

There is strength in numbers so we must work at building the Action4Canada Chapters. Many provinces are having Municipal elections in the fall and this includes School Boards. The municipalities are key to the UN Agenda and we have the power to take back our towns and cities…but we need you! Join a Chapter today or apply to become a Chapter Leader. Join or apply HERE

A4C has over 150 Chapters Nationwide…and growing!

Call to ACTION! Send the following letter to your MP and implore them to bring public awareness to the WHO’s scheme to implement a so-called “Pandemic Treaty” by 2024 (but it could come sooner). As the letter explains, the UN and WHO are unelected foreign actors attempting to undermine our democracy. It is irrelevant if this treaty passes, as it is in violation of the Canadian Constitution and, therefore, is of no force or effect. However, it is critical that our elected officials understand our unwavering position on this matter. Printable PDF Letter

NOTICE: Action4Canada Meets via zoom every Tuesday @ 4:30pm PDT/7.30pm EDT to help further equip Canadians in defending their rights and freedoms as well as educate them on how to best utilize the Action4Canada resources. A4C also covers current events and taboo issues the government would prefer we didn’t discuss. This week Tanya Gaw will be reviewing the WEF report and discussing effective ways to re-enter Canada when travelling from the USA. There will be a time of Q&A.  Register in advance for this meeting.